Trinity Church owes its foundation to Henry Trigg, a carpenter, businessman and Congregationalist from Gloucester, England.  Trigg arrived in the Swan River Colony aboard the ‘Lotus’ in October 1829.  His personal wealth allowed him to take up a land grant of 1,208 hectares, encompassing what is now known as the suburb of Churchlands. Trigg initially attended the first Anglican Church, where he was a choirmaster. He later joined the Wesleyans, but from 1843 he held prayer meetings in the Congregational tradition in his own home on Bazaar Terrace.  Two people were present at the first meeting Trigg commented “Himself and the Lord”. In 1845 a few friends met to discuss the building of a chapel. Land was leased for 18 years in William Street and in 1846, a chapel was constructed, where for six years, Trigg conducted all the services until, 1852, when the London Missionary Society sent out the Reverend James Leonard to be the first ordained Congregational minister.

The next 10 years were difficult ones in the colony, but the church grew and by 1863, it was decided to buy land in St Georges Terrace (for £350) and build a larger chapel.  The new church was built in 1865.  The Congregational denomination “did not accept any portion of State aid to religion, but by their own zeal and liberality sustained and built up their cause.”  This second church, now used as a hall, is classified by the National Trust.

In 1870, a committee was appointed for the purpose of building a new schoolroom on the open land to the north of the new church.  The new schoolroom was opened in August 1872.  Initially used as a schoolroom, it was subsequently used as a gymnasium and today is home to the Trinity Lunch Room, serving Perth’s best cup of tea. Below the floor of the schoolroom was constructed a rendered brick built baptistry, rediscovered again in 2013 when the original timber floor to the schoolroom was replaced.  Two small wings were subsequently added, one of which remains and now houses the kitchen for the Lunch Room. 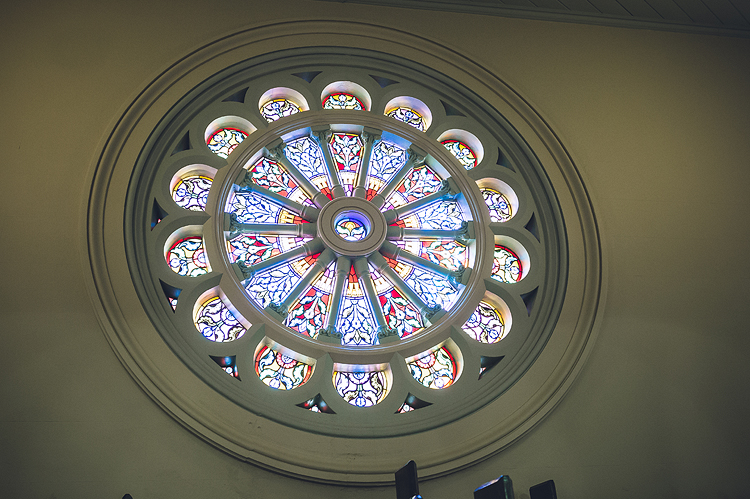 In 1892, plans were drawn up by the grandson of Trinity founder, Henry Trigg, for construction of a new church, to be located in front of the second church.  The present church was built by Bunning Bros at a cost of approx. £7,500, including £500 for the organ.  The highly decorative Romanesque façade features Victorian turrets and two steeples topped with iron finials.  Above the entrance is a fine rose window designed by the architect as a personal memorial to his grandfather.

In 1970, plans were approved for redevelopment of the whole of the Trinity site through to Hay Street in order to build a tower block of offices fronting onto St Georges Terrace, with a second floor circular church behind.  After four years of uncertainty, delay, economic downturn, the church members passed a resolution to cease negotiations with the developers.  Eventually a modified scheme was adopted in which the church and its halls were retained and the present three level arcade constructed.

Click here to view a gallery of photographs from the archive.

More information about Trinity's history is available in A Brief History of the Trinity Uniting Church Buildings.